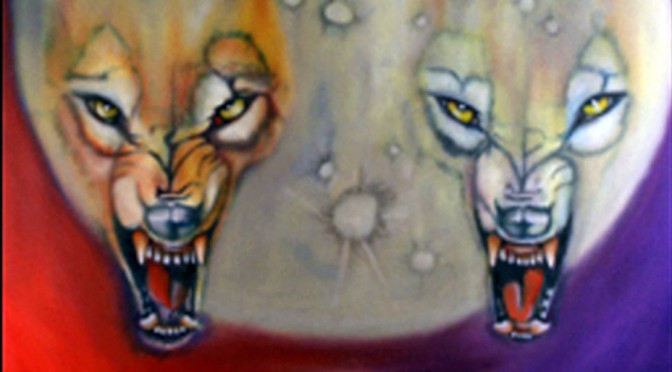 The path of the moon represents our magic mirror/sphere of sensation, where we see reflected the world behind the world.  It is the astral realm that is the structure upon which the fabric of the world of our senses hangs.

Through cleansing our sphere of sensation, our sense of perception, we can create our universe as we choose to see it.

The path is guarded by two wolves, Wep-wawet and Anubis, deities from ancient Egyptian belief whose titles offer a key to what they represent, Wep-wawet  Opener of the Ways and Anubis Lord of the Sacred Land.

When we overcome our fear of what these deities symbolize within us then we are making our first steps toward becoming whole.

Tarot card Moon associated with the Sun in Pisces represents a period of dissolution depicting the end of a cycle.

When referring to cycle within the context of the following description, we must remember we are the cycle within what appears to be the sphere of the cosmos.

The image of the tarot card Moon is taken from the Tarot of the Morning Star deck.

Pisces being the final  sign of the zodiac, represents the closing of our journey through the astrological signs. Tarot Moon, the card corresponding to Pisces, therefore graphically illustrates this closing of a cycle.

At this stage of the sequence we are witnessing the dissolving of one system into another. This is not recycling as in duplication, it is to move into a new and original sequence of experiences.

The red and blue colors of the background are opposite ends of the color spectrum.

For these reasons, tarot Moon is often associated with fear and dread because it symbolises our entry into new and original territory. Here in the realm of the Moon we are privy to the guidance of Gods, ancestor spirits and past life experiences that speak out of inner darkness to warn, advise and guide.

The “fear” aspect of the card is due to the loss of bicameral mind and the appearance of consciousness. No longer hearing voices of ancestors and gods we feel abandoned.

On the QBL Tree of Life,  Tarot Moon connects the sphere Netzach, Victory to the sphere Malkuth, the Material World. This can be read as victory of the material world meaning, to allow creations to be born, live and end. Everything that exists eventually becomes the stuff of memory and loss. Life is the experience of physical existence.

The Hebrew letter Qoph, corresponding to this path, means “back of head” symbolizing the subconscious mind, a fitting thought for Tarot Moon.