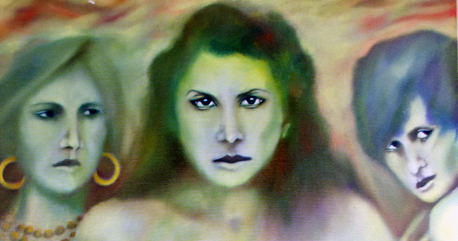 Sirens dangerous and beautiful.  We are drawn like moths to a flame.

The painting depicts the creatures in the modern sense of the word as their role of femme fatale rather than the traditional Greek mythological representation as part woman part bird.

A mysterious and seductive woman whose charms ensnare her lovers, often leading them into compromising, dangerous, and deadly situations.

An archetype of literature and art. Her ability to entrance and hypnotize her victim with a spell was in the earliest stories seen as being literally supernatural; hence, the femme fatale today is still often described as having a power akin to an enchantress, seductress, vampire, witch, or demon.